So I decided I wanted to start posting some music for my readers and start a discussion about it. Here is the first post. Marques Houston is an R&B singer. He started in the group IMx and was with them until he went solo in 2002. He has a wonderful voice, very soft and creamy. Marques has a total of 5 solo albums. I really love his new cd, "Mattress Music". As you can guess, it is all about Mattress Mambo! Its romantic, a little provocative and naughty. My favorite song is Noize.
Earlier this year he announced that he would be making a new album with IMx to be released in 2011.


Take a Listen - please post what you think and your favorite track! 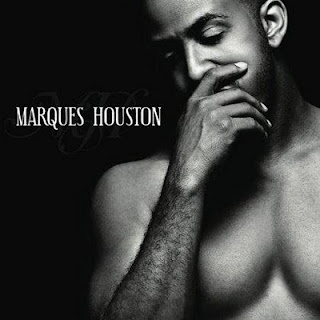 Mattress Music by MarquesHouston
Posted by Unknown at 9:06 PM 2 comments: Links to this post

Modes4U just hit 15,000 fans on their Facebook page! So they have a huge giveaway going on to celebrate. They are giving 20 prizes to 20 winners! You just might win!
Prize List: To enter to win one of these awesome prizes, just head over to Mode4U's blog and read the rules of entry!
Have fun and Good Luck!
Posted by Unknown at 9:49 AM No comments: Links to this post

Skin-peel.com is having a Sale!! With orders $100 or greater type in promo code: GOBBLE20 for 20% discount.
Orders with this coupon applied will be shipped a FREE Glycolic Micro Peel Scrub. (Do not add this to the cart.)
Skin-peel.com has contacted me to start this giveaway for you, my readers!
What you will get: 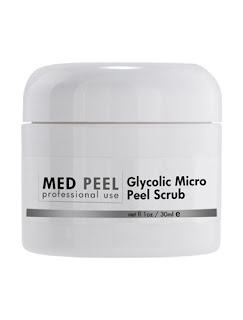 What this product is and does:
Perfect as a standalone resurfacing treatment or to significantly increase the penetration of a skin peel solution. Made with real microdermabrasion crystals to physically resurface the superficial skin layer, use as pre-peel treatment allows the acid to penetrate deeper into the skin surface. The Scrub is also a blend of Glycolic and Lactic Alpha Hydroxy Acids and Salicylic Beta Hydroxy Acid to further promote a purifying and rejuvenating treatment.
*The Giveaway*
Mandatory Entry: Must follow my blog via GFC.
Extra Entries:
1. "Like" Skin-peel.com on Facebook (1)
2. Follow Skin-peel.com on Twitter (1)
3. "Like" one of Skin-peel's products on their site. (2)
4. Post Skin-peel's banner on your website. (2)
(I will post it as soon as I have one for you.)
5. Follow my blog via Networkedblogs. (1)
6. Follow me on Twitter. (1)
7. Post this giveaway on your blog roll or sidebar. (2)
8. Blog about this giveaway. (5)
Giveaway is open to USA and UK only . Ends on December 10th 2010. Good Luck!
Posted by Unknown at 3:42 PM 8 comments: Links to this post

I got a special chance to review a t-shirt from CrazyDog T-shirts. They carry all types of Funny t-shirts, Vintage t-shirts and Video Game t-shirts for men and women. They sent me one of their for men, a green shirt (darker green than the picture below) and a picture of Mario on it. This shirt is officially licensed with Nintendo. The shirt is very soft, comfortable and hangs nicely on the body. We washed it according to the label directions and it did not shrink. The picture has not cracked or peeled after five washes.
I recommend this site if you are looking for a gift for christmas or an upcoming birthday!

* Giveaway *
The winner can choose between Mystery Tee (you will need to specify your size (in Mens) or $15 gift card to the website. Winner will be chosen by random.org
One rule: winner could not have won a shirt from CrazyDog or have been sent a shirt for promotional purposes in the last 90 days. (US Only, Sorry)
Mandatory Entry: Visit CrazyDog and tell me what shirt you like the most. (1 entry)
Extra Entries:
please post separate comments for each entry.
1. Follow my blog via GFC (1 entry)
2. Follow @Chiisexy and @CrazyDogTshirts on twitter. (2 entries)
3. Follow me on NetworkedBlogs. (1 entry)
4. Post a comment on the CrazyDog Facebook page telling them what your favorite tee is or ask them a question about the products and let them know that Choose Your Hype sent you. (1 entry)
5. "Like" or "Share" one of the products on their website. The buttons for these are on all product detail pages, above the main image. (1 entry)
6. Add my blog button to your blogroll or sidebar. (2 entries)
7. Add my giveaway to your blog roll or post about my giveaway. (3 entries)
Good Luck everyone! Can't wait to see what you like :) Giveaway ends on November 30th, 2010 at 10pm MST and winner will be announced on the December 1st by noon.
*This was not a paid post and honest opinions were used. The opinions are solely my own and may vary from others. Thank you to CrazyDogTshirts who supplied the products for the review and giveaway.*
Posted by Unknown at 2:27 PM 1 comment: Links to this post

When I received this cd of Norah Jones "...Featuring", I was kind of hesitant to listen because normally her music isn't what I listen to. But after listening to tracks 4 - Baby It's Cold Outside with Willy Nelson , 9 - Life is Better with Q-Tip and 10 - Soon the New Day with Talib Kweli, I thought "wow this is nice". I will admit that some tracks I don't like too much, but I love her voice. Actually her voice is the only reason why I continued to listen. When the track Court & Spark (16) came up, I fell in love with the piano solo and I had to replay the song again! I believe if you love Norah's singing already, you will love her music even with this album. I'm a new fan!

The closed beta for Legend of Martial Arts by Perfect World is starting on November 24th! Here is a little bit of info on the game:
This is the rebirth of Kung Foo, a title that was postponed because PW didn't feel it was ready to be unleashed onto the open market. After taking a ton of feedback from the orginal Kung Foo open beta, they are  happy to present to you a game that has been granted new life by way of total graphical and content overhaul!

Mage Class
So I was asked to help PW with the closed beta and they also gave me two extra keys! I decided to give away one here and one to a twitter follower.
The Rules:
To enter for blog giveaway, all you need to do is follow my blog and post a reply here telling me what game you are playing at the moment. If you are not playing anything, just tell me what game is your favorite of all time.
To enter my twitter giveaway, you need to follow and retweet this:
"RT and follow @chiisexy for chance to win a closed beta key to Legend of Martial Arts #giveaway details here http://goo.gl/bv44c"
This giveway Ends 11/20 at 9pm pst! Good luck!
Posted by Unknown at 9:56 PM No comments: Links to this post

I told you about a week ago that I was to review a Skin-Peel.com product, so here it is.
Preview and company info on previous post here.
The peel that I got was the Salicylic Acid Peel 10% Light Skin Peel and it comes with a Neutralizer Solution Spray. Also comes with a clear case, instructions and Gauze pads.
Salicylic is a Beta Hydroxy Acid and the perfect choice for those with oily skin because it is able to penetrate through sebum, dissolve blackheads, and acne.  Salicylic is also used to make aspirin thus making it an anti-inflammatory. 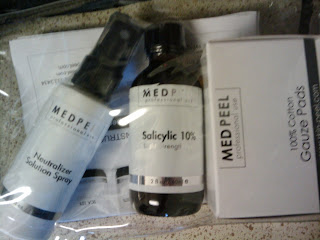 Before I read the instructions, I was a little bit scared because I have never done anything like this before by myself. After my first attempt, I was surprised on how easy the application was. I was also surprised how soft and smooth my skin felt afterwards. I used this for a total of six days. Four days in a row, two without and then two more days with the peel. The reason I went two days without is because my skin started to peel and I needed a break from it. I recommend, if you decide to get this product, that you use some gloves when applying the skin peel because my two forefingers started to peel as well. I absolutely Love this product! I would also recommend using it only every two days or so. It is also recommended that you use an SPF after using this product because skin is renewed and fresh.
I can't wait to try out their new release Fusion Peel! It is a multi-acid, multi-enzyme peeling solution suitable for all skin types and issues. It has minimal irritation, almost no downtime, and fabulous corrective action. It's a Fusion of exfoliating agents that produce a Fusion of skin benefits such as clearing acne conditions, reducing age spots, melasma and discoloration, improves skin texture and tone, and softens crows feet, fine lines and wrinkles.
Here is a picture after first day: 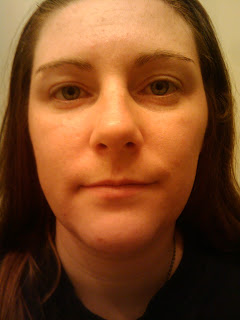 Here is after the sixth day: 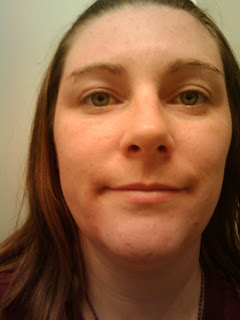 I also just want to say that the people are amazing at Skin-peel.com Their customer service seems to be top priority. They answer your questions and even help you choose the best product for your skin type.
I was told that they will provide me with a product in the near future for a giveaway. So until then here is a special code that Skin-Peel.com has provided for you:
20% off your entire order when you order by 12/31/2010
Use SHEBLOGS code when you checkout.
Happy Shopping!!
*This was not a paid post and honest opinions were used. The opinions are solely my own and may vary from others. Thank you to Skin-peel.com who supplied the products for the review.*
Posted by Unknown at 8:53 PM 3 comments: Links to this post

NVbeauty has been holding a halloween contest sponsored by SedonaLace. It's still going on until November 7th. The prizes are a brush set for 1st and a 15 piece eye shadow palette. On how to enter go to NVbeauty's blog for the details.
My entry: 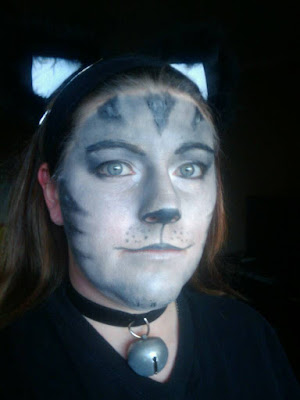 Published with Blogger-droid v1.6.4
Posted by Unknown at 4:09 PM 2 comments: Links to this post

Lime Crime's much-anticipated primer, Candy Eyed Eyeshadow Helper, is finally here! Pre-sales begin now, with orders shipping no later than November 15th. But hurry, the first batch is selling out quickly and who knows when the next one will be coming in!
Quote from site: " No other primers work for you? Meet your new BFF: the Eyeshadow Helper! Formulated to withstand extreme heat, moisture and even the oiliest of eyelids, this primer is guaranteed to keep your eyeshadow on! In fact, it's so potent our lab says you will need waterproof remover just to get it off."


So what are you waiting for?? Click the image to order now!