So I have always been in love with Japanese fashion but I do believe that Lolita has got to be my favorite. There are different types of lolita which I will describe to you. The list: sweet, gothic, hime, wa, casual, punk, classic, country, shiro, kuro, sailor, guro, cosplay, aristocrat, Ero and kodona lolita. Each has its own definition because of style and colors.

Sweet Lolita - Sweet Lolita is the most over-the-top and child-like style. It uses many bows, ruffles and light colors to this outfit. The most common colors used in a Sweet Lolita outfit are pink, white, and powder blue, but an outfit can be made with nearly any pastel or plaid color as long as there are no neon colors. Common patterns or motifs in Sweet Lolita are toys, strawberries, cherries, cakes and candies, hearts, polka dots and flowers. For makeup light or natural is commonly used and for hair teased pigtails or bouncy curls. 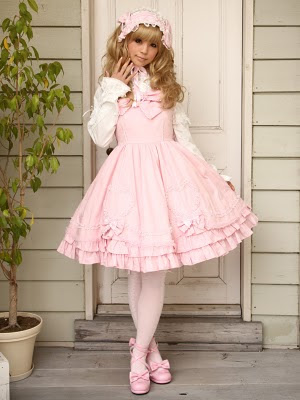 Gothic Lolita - This style is primarily influenced by victorian inspired goth style and not cyber goth or industrial style. A Gothic Lolita, is very modest in today's standards. As with other Lolita styles a Goth outfit can usually be recognized by the bell-shaped skirt, puffy sleeves and black or rich dark colors such as burgundy, purple and navy. It is common for this style to involve details in complementary or contrasting colors, such as the infamous black and white coordination choice. Depending on the outfit, the makeup for goth style can range from a light natural look to a dramatic smokey eye with a dark red lip. A common mistake by beginners is the use of black lipstick and a white face. Both a white face and black lipstick take away from the elegance of the lolita style and should only be used as stage makeup. 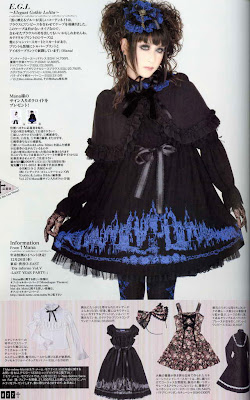 Hime Lolita - Or "Princess Lolita" is a very elegant style that often involves miniature crowns, tiaras, large hair, and big dresses. Because Hime does reflect a sense of royalty and class, it is hard to pull this style off unless you have done your best to look like a "Princess". There's a fine line between Hime and the other styles as it is mostly defined by how you style yourself and not on the clothing. It is most common to see Hime Lolitas wearing Sweet Lolita dresses that have a Rococo (mid-18th century) influence. Any natural and light pink makeup will look good for this style. As accents to this style, use pearls, roses and bows. 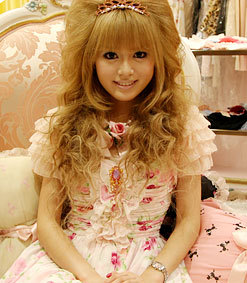 Wa Lolita (My Favorite out of all lolita styles) - Wa Lolita is a style that is often recognized by the kimono look of the outfits. Wa Lolita involves long sleeves, and obi (sash belt) that are taken from kimono/yukata outfits, and fused together with the bell-shaped skirt of lolita. Wa fabrics are often very extravagant like most Kimono fabrics, involving detailed flower prints, and cranes. Like all Lolita outfits and yukata, Wa should not be made out of shiny fabrics. Modesty is still a large part of this style, and your skirt should be a reasonable length. Traditional Japanese Kanzashi or flower hairclips may work well with this style in the place of a head-dress. Makeup can range from light and natural to Japanese geisha inspired. Don't overdo the geisha makeup as it will most likely end up looking like a costume, and ruin the look of your outfit.

** I have two Wa Lolita outfits which I will be wearing to Phoenix Comicon 2010 next weekend. I will post pictures of me wearing them after the con.** 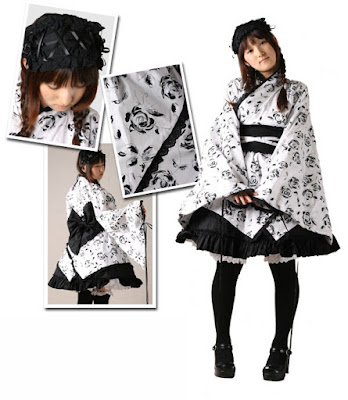 Casual Lolita - Casual Lolita is a more toned down version of the style, while still retaining the basic lolita elements. It is very hard to put together a nice casual lolita. Most favoured in this style is a nice simple cut-sew perhaps with a motif of some sort paired with a lolita skirt and little hair accessory or headdress. This style can best be described as what a Lolita would wear when not "dressing up" and is still modest but not as over the top as most other Lolita styles. A great outfit can be compiled out of any color or pattern as long as it is matching throughout the outfit. A simple cardigan over a shirt creates a nice casual look.

Punk Lolita - Punk lolita comes generally in two forms, first is an outfit that conforms to the general shape of lolita, a bell shape knee length skirt or a bit shorter for this style, but without as many clean lines as the other styles. Accessories and fabric choice are very important to this style: deconstructed fabrics, fishnets, chains and studs are good choices. Also layering is key to this style! The second form of this style is an outfit that has a lighter feeling than a normal punk outfit and takes considerable inspiration from the Lolita style but doesn't quite follow the general shape. It is a much girlier punk outfit with frills or bows. The skirts do not have to be knee length and bell shaped shaped, but they are not skin tight and crotch length either. 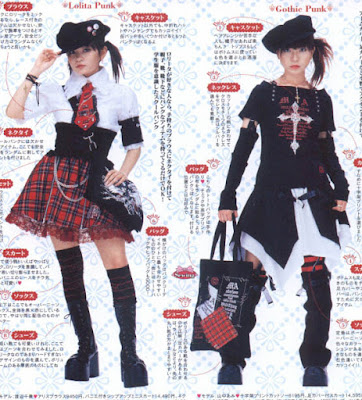 Classic Lolita - Classic Lolita is the tamest of all the Lolita styles as many Classic dresses could pass for a garden party, church or summer dress. Classic Lolita is about looking classy, and goes back to the roots in Victorian fashion. This style takes inspiration from the floral patterns, and the sense of elegance of the Victorian era. Classic Lolita skirts have an A-line shape instead of the normal bell shape.

Country Lolita - Country Lolita is derived from the Sweet Lolita style, and is often a little hard to distinguish due to the use of the same sweet patterns and motifs that the Sweet style uses. However the Country Lolita style can be recognised by straw baskets, hats, fruit, and gingham patterns. Most lolita outfits require a blouse under a jumper skirt to pull of the Lolita look, but because Country Lolita is associated with the out-doors one may be able to get away with-out a blouse. Country Lolita follows the same modest guide-lines, as well as the full, bell-shaped skirt. The makeup for this style would be very basic, and natural. If you're going outside try some sunscreen, some light lipstick, and some blush.

Shiro/Kuro Lolita - Shiro means white and Kuro means black. Shiro Lolita is an outfit made completely in white or off-white and cream colors. Kuro Lolita is an outfit made completely in black or colors that are close to black like navy blue and dark violet. These styles are usually worn together as twins for contrast. As a side note, don't wear black shoes with Shiro style...this is tacky!

Sailor Lolita - Sailor Lolita is very much inspired by Japanese sailor-styled uniforms. Sailor collars, dark blues, and whites are often included as well as nautical motifs, such as ship anchors and wheels. With this style the same bell-shaped skirt is expected, quite often this skirt may be pleated, and the outfit may include a puffed short sleeved blouse with pockets. Striped socks/stockings often look nice when coordinated into a Sailor Lolita outfit.

Guro Lolita - Or sometimes called Gore Lolita. The gore can range from anything to some bandages, a sling, or some blood splatters on your clothing, but try not to overdo the blood. Guro is a style that portrays a 'broken-dolly' sort of look, a gruesome yet innocent sub-set of Lolita. A Guro Lolita outfit can really be pulled-off in any colour, but white really does look fantastic if you want to have some blood splatters! Most Lolita my use an apron for blood splatters as to not ruin the dress. Although Guro may sound a bit much like a costume, it is a part of a fashion and follows all of the guidelines that the other styles do. 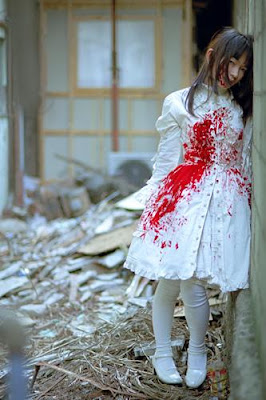 Cosplay Lolita - Or Costume Lolita. This style is mostly looked down upon because its usually seen at conventions being worn by people that don't understand that Lolita is a fashion not a costume. This style still needs to be listed to understand the difference. Cosplay Lolita involves low quality materials which include thin cotton or shiny fabrics, satin ribbons, huge high heels, corset type lacing, combat boots, tacky lace gloves, costumed ears, maid outfits, colored wigs and the list goes on. Cosplay Lolita takes the lovable elements of Lolita fashion such as bows, lace, frills, and pushes them to the extreme, and removing the classy image that Lolita fashion has.

Aristocrat Lolita - Elegant Gothic Aristocrat or EGA. This is a mature style of Lolita as in there are no cute motifs such as lace, prints, frills or bows. Skirts are usually worn long, except in the summer. High corseted waists on skirts and corsets of all kinds are common. Also popular in this style are fitted jackets with tail coats, tophats, veils and frilly shirts. An Aristocrat's hair is usually done in buns and other lifted styles, however it is okay to wear your hair down, short or curly but not too curly(avoid barrel curls). Makeup is usually mature and sometimes on the darker side. Somewhat darkened eyes and dark red lipstick is common. Men are often seen in this style if they like to be "dressed up". 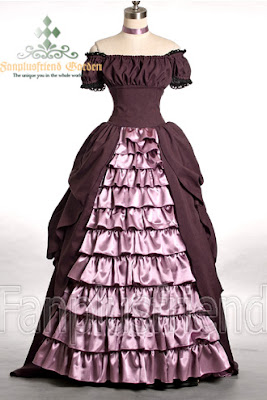 Kodona Lolita - "Boystyle"/Dandy(men that wear this style)/Ouji (Prince). This style is either laid back or very extravagant. Both men and women can dress this style, but mostly women do. Sometimes Kodona has feminine touches such as pretty shoes and accessories. "Prince Pants" are common is this style, which are short capri pants that cut off at the knee with some details on them such as lace. Other additions are suspenders, ties, bowler caps and long socks. Some of the more extravagant styles can include things like capes, canes, and top hats, but they keep the boyish part in tact so that they are not mistaken for Aristocrat. Hair is often in a shorter style. Those with longer hair tend to put their hair up in a bun under a cap or wear a nice short wig.

Posted by Unknown at 11:25 PM 4 comments: Links to this post